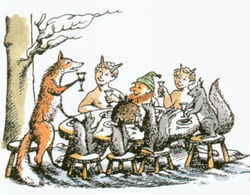 Author’s note: I shared these thoughts in part during the closing session of Hutchmoot, which is the weekend conference of the Rabbit Room community. If you don’t know what Hutchmoot is, you can check out the website here. For many of the Story Warren crew, it is a blessed time to be inspired and energized to keep on creating.

How Edmund hoped she was going to say something about breakfast! But she had stopped for quite a different reason. A little way off at the foot of a tree sat a merry party, a squirrel and his wife with their children and two satyrs and a dwarf and an old dogfox, all on stools round a table. Edmund couldn’t quite see what they were eating, but it
smelled lovely and there seemed to be decorations of holly and he wasn’t at all sure that he didn’t see something like a plum pudding.

At the moment when the sledge stopped, the Fox, who was obviously the oldest person present, had just risen to its feet, holding a glass in its right paw as if it was going to say something. But when the whole party saw the sledge stopping and who was in it, all the gaiety went out of their faces. The father squirrel stopped eating with his fork half-way to his mouth and one of the satyrs stopped with its fork actually in its mouth, and the baby squirrels squeaked with terror.

“What is the meaning of this?” asked the Witch Queen. Nobody answered.

“Speak, vermin!” she said again. “Or do you want my dwarf to find you a tongue with his whip? What is the meaning of all this gluttony, this waste, this self indulgence? Where did you get all these things?”

“Please, your Majesty,” said the Fox, “we were given them. And if I might make so bold as to drink your Majesty’s very good health – ”

“Who gave them to you?” said the Witch.

“What?” roared the Witch, springing from the sledge and taking a few strides nearer to the terrified animals. “He has not been here! He cannot have been here! How dare you – but no. Say you have been lying and you shall even now be forgiven.”

At that moment one of the young squirrels lost its head completely.

“He has – he has – he has!” it squeaked, beating its little spoon on the table. Edmund saw the Witch bite her lips so that a drop of blood appeared on her white cheek. Then she raised her wand. “Oh, don’t, don’t, please don’t,” shouted Edmund, but even while he was shouting she had waved her wand and instantly where the merry party had been there were only statues of creatures (one with its stone fork fixed forever half-way to its stone mouth) seated round a stone table on which there were stone plates and a stone plum pudding.

From the chapter “Aslan is Nearer”

I read a quote once about The Lion, the Witch, and the Wardrobe where the author stated that some feasts in Narnia are seen as “acts of war.” Eating and drinking are not normally viewed as a combative act, so the thought piqued my curiosity.

The animals’ Christmas feast (above) is an act of war to the White Witch because it tells the truth about her authority. The witch views it as an act of treason; she is threatened by the celebration. The thaw is underway, Father Christmas is in the wood, and the witch’s reign is drawing to a close.

The animals’ feast bellows out hope, joy, and the truth that Aslan is on the move. Who knew that some plum pudding and holly could be so offensive?

Lewis writes in Mere Christianity, “Enemy-occupied territory–that is what this world is. Christianity is the story of how the rightful king has landed, you might say landed in disguise, and is calling us to take part in a great campaign of sabotage.”

No doubt you have been at a feast that was an act of war. Perhaps you didn’t realize it at the time, but you have. Anytime you sit at a table with those who share your conviction that Jesus is returning, you declare war on the lies of this world — this mixed-up, passing-away, broken world. You reinstate the truth of creation, joy, and all things made new.

On the road west to Nashville this past Thursday, my husband and I sat in silence and listened to all of Andrew Peterson’s new album The Burning Edge of Dawn. There is a point on the record where the gloom grows heavy and thick, and the rain keeps falling. The darkness is palpable.

At times the world and its dark press in upon us relentlessly. We are tempted to give up hope and light and all that we hold dear. The forces of sadness and guilt heap condemnation and defeat upon us.

Then like a guttural cry from somewhere unknown, the next song rings out:

Set your face against the night

and raise your broken voice

This line of the song, taken from Philippians, landed on my ear as a war cry. What a strange thing for Paul to do in a dank prison, chained to a guard and waiting for deliverance or death.

What a strange thing for us to do week in and week out — on birthdays, on holidays, at homecomings, weddings, or church potlucks — as evil targets Christians by name in our world every week, nearly every hour.

Yet onward we go — together at feasts and communion tables, feasting and making a war cry.

We rejoice because we are advancing under the leadership of the One True King, who sets the world free from bondage to the enemy forces by His great campaign of sabotage. We raise our broken voices and repel the dark. We join with brothers and defy death in an act of community. We feast on fine food and wine. We conquer armies with a marching band…or a paintbrush…or a pencil…or a guitar.

I love the passage in the Old Testament where God overturns Israel’s enemies with trumpets and light:

So Gideon and the hundred men who were with him came to the outskirts of the camp at the beginning of the middle watch, when they had just set the watch. And they blew the trumpets and smashed the jars that were in their hands. Then the three companies blew the trumpets and broke the jars. They held in their left hands the torches, and in their right hands the trumpets to blow. And they cried out, “A sword for the Lord and for Gideon!” Every man stood in his place around the camp, and all the army ran. They cried out and fled.

At my house on Resurrection Sunday, we raise our glasses and say, “let us eat, drink, and be merry, for yesterday we were dead.”

Battle stations, everyone — to the feast! Raise a glass in warfare.