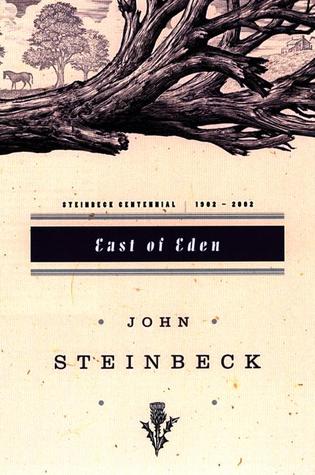 I spent most of the last summer with the Trasks and the Hamiltons. East of Eden, John Steinbeck’s masterwork of four-hundred-plus pages had long been on my to-read list, and with the help of my book club, I finally got through it. Steinbeck himself considered it his finest novel; after finishing it, he said “I have put all the things I have wanted to write all my life. This is ‘the book.’” It is not an easy book. It’s quite bleak. The story is Steinbeck’s retelling of the patterns of sin and alienation birthed in the Cain and Abel story in Genesis 4: “And Cain went out from the presence of the Lord and dwelt in the land of Nod on the east of Eden.” (Genesis 4:16)

Many themes are explored in the book, but what stood out to me as a reader is East of Eden were the instances of people “imagining others” — either for their good or for their ill. Adam Trask, the protagonist in the first half of the book, makes his beloved into a beautiful thing to be attained to, even though she is in fact, as Steinbeck says, “a monster born to human parents.” She is irredeemable in everyone else’s eyes but Adam’s. He is willing to do anything for her, even as she works to destroy him and the life he attempts to build for them.

A generation later, Adam’s son Aron Trask begins down the same road his father took with a woman: this time with his childhood friend and eventual girlfriend, Abra. Though she is not the force for evil that Cathy was, Abra feels the negative consequences of Aaron’s unsuitable idolatry of her. Aron makes Abra his entire world once he discovers that the adults in his life have all lied to him. From the age of twelve, he is infatuated with Abra; she is the only person in the world to him. By the time he is in college, Steinbeck tells us, Aron has made her “his immaculate dream and, having created her, fell in love with her….The results were love letters that dripped with longing and by their high tone made Abra very uneasy.”

Later, after circumstances separate the couple, Abra confesses some relief. In a conversation with Lee, a family friend, she says “Lately I never felt good enough. I always wanted to explain to him that I was not good.” “And not that you don’t have to be perfect, you can be good. Is that it?” Lee replies, understanding her. Abra was exhausted by the weight of Aron’s false expectations of her: she knew she could never be the perfect one he perceived her to be. When the pressure was removed, she felt free to be just good.

On the other hand, Caleb, Aron’s twin, has always been haunted by escaping people’s bad expectations of him. He also has his own bad expectations of himself, understanding himself to be a victim of his inclinations towards evil, inherited from his mother, Cathy. Cal eventually has a moment of clarity when he renounces this idea. Face to face with his mother, he can say “I don’t have to be you… I just know. It just came to me whole. If I’m mean, it’s my own mean.” At last, he knows he is not susceptible, caught up in generational sin, and unable to change things. He is finally able to imagine his way forward.

I understand that John Steinbeck and I would probably part ways theologically much of the time, but his focus on the imagination in this novel made me, as a Christian, pause. How many of my earthly relationships are affected by this exact phenomenon: I presume someone to be something they are not; or worse, I essentially aid someone in being less than they could be, because I don’t allow for it? Do I hold back encouragement or joyful expectation on someone else’s behalf because I can’t imagine that God would make them, or their circumstances, into something wonderful?

As Christians, we are all on the path to being made more like Christ. Sanctification is a long road, full of trips and hiccups along the way. What I understand to be sanctification in my own life might look like a stagnant season to you, and vice versa. I wonder how our perceptions of one another — and our tendency to focus on one another rather than run our own race (I Thess 4:11) — might hold back greater encouragement, greater love, and even greater growth.

We are also prone to be tempted in the other direction Steinbeck explores in the novel: that of idolatry of one another. I often see brothers and sisters set someone on a pedestal: this could be a spouse, a friend, or a spiritual leader of some sort, only to have that person be, in time, unsurprisingly human. The Christian’s hopes are dashed as they see sin and struggle in this person’s life. We will never be truly free to love people in their humanity if we don’t first allow them to be human.

One instance in Scripture where I speculate that this phenomenon of “imagining for others” plays a part is the story of Barnabas, Paul, and John Mark in Acts 15. When Paul and Barnabas were ready to move on to the next location in their missionary journey, they had a harsh disagreement over John Mark. Was he ready to come along? Paul thought no; Barnabas said yes. They ended up parting ways over the disagreement, and John Mark continued on with Barnabas, while Paul went on alone.

We cannot conclude from what Scripture offers us, but I wonder about this moment in time with these three men. What role did imagination-for-others play in this situation? Was Paul’s resistance to Mark’s ministry a failure of imagination on his part — one where he simply could not picture Mark being able to handle the demands of the next stage of the early church? Was Barnabas a “son of encouragement” because he was able to see better — imagine better — what the Lord was capable of achieving in and through certain people?

Eventually, we come to a happy ending in this story: Paul, at the end of his life, aging in prison, calls for John Mark, as he has become “very useful to me in ministry.” (2 Tim 4:11)

I find myself chastened to imagine well of others if I am to be a good encourager. It is an act of faith to look at another fallen human being and say, “I can imagine the Lord doing this through you.” It is the heart of encouragement to picture, to imagine, where someone has been and where someone might be headed. It is a bolster to hear from another believer, at least, that now that we don’t have to be perfect, we can be — and we are — good.